There are 8 gladiator classes defined by their equipment and the skills compatible with these classes. A specific gladiator can switch to any class by switching to the class specific gear. His training and physical attributes will suggest that some classes are a better fit.

Each class has different requirements for their attributes.

Main attributes for the classes

The Murmillo is a character that is closest to a roman legion infantry soldier using a Gladius and a curved rectangular tower shield (Scutum). He is well armored wearing a helmet with visor and feathers attached. This class is very well known from the character Crixus of the popular Spartacus TV series.

The Murmillo is the most defensively oriented character from the available classes. He makes use of the toughest armor available and has a huge shield to hide behind. Many skills employ his shield to attack and ensure that he is not exposed too much at the same time. He is getting his buffs up, gain focus and the mental state to deal punishment subsequently. 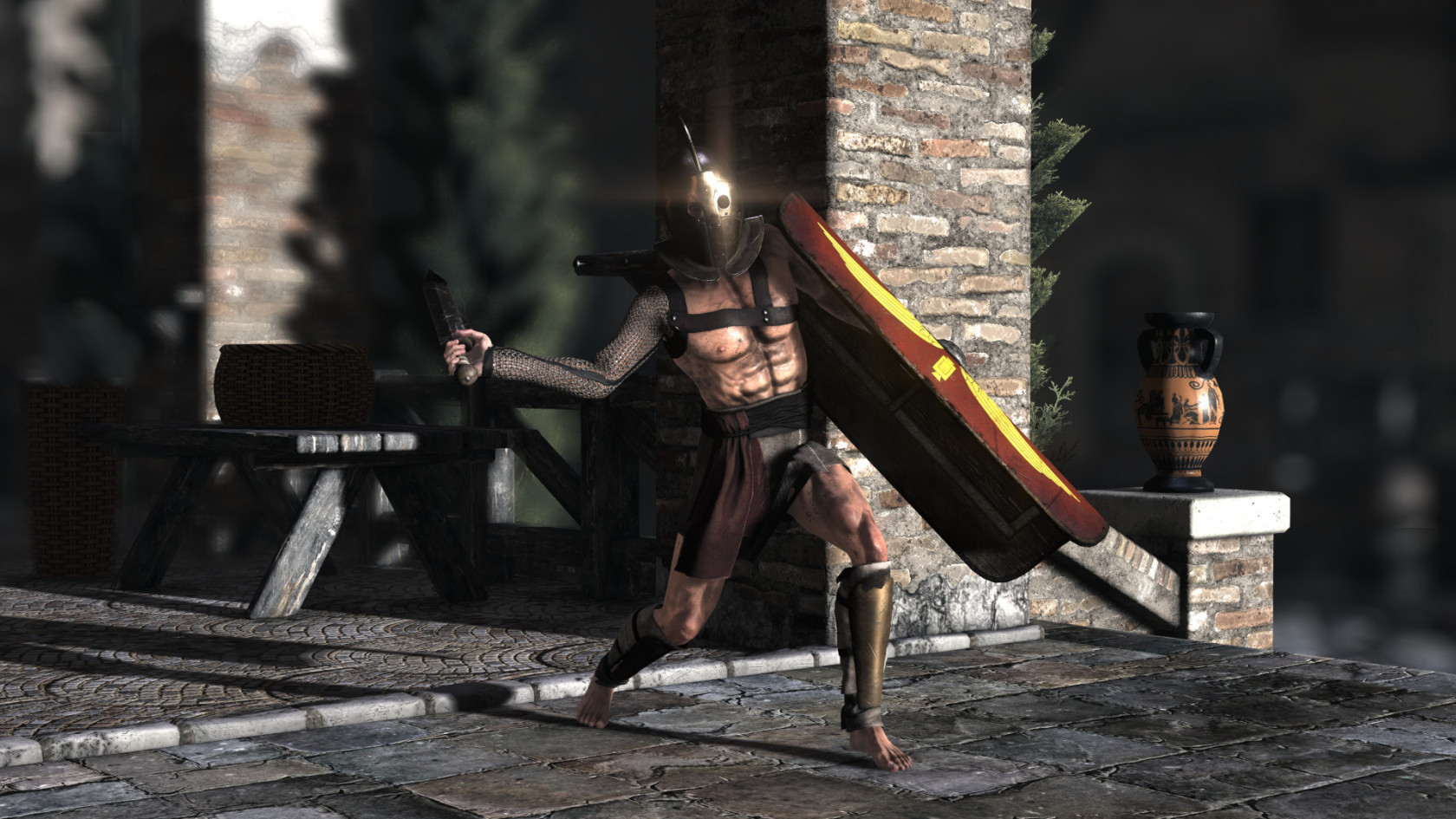 The Secutor is very similar to the Murmillo. He is specialized in fighting the Retiarius (the Net Fighter). His armor has round edges so that the net does not get stuck easily on him. He is a bit more offensively oriented than the Murmillo and provides a good compromise between armor, shield moves and quick moves. 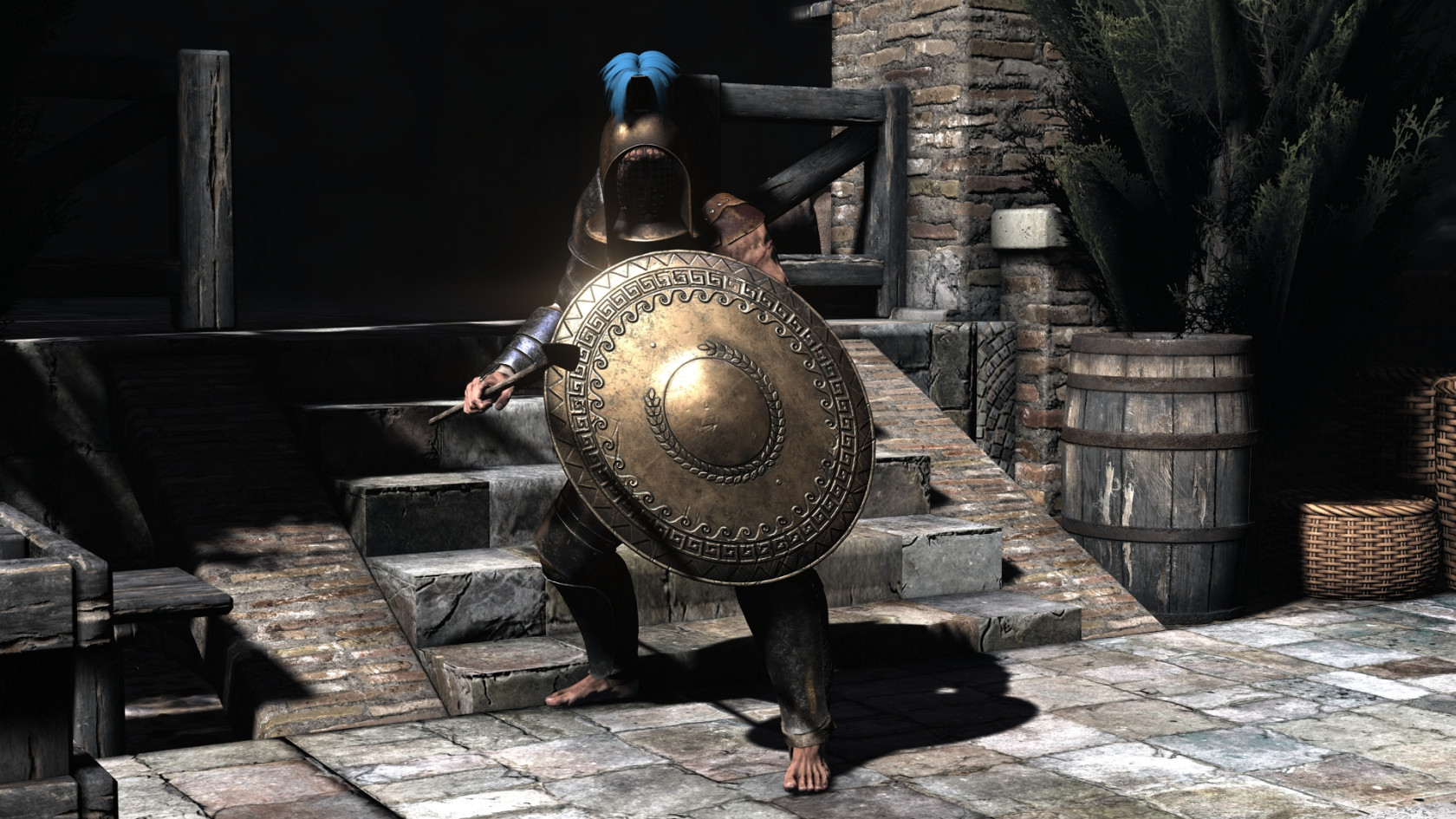 The Hoplomachus is resembling a greek hoplite wearing a spear and a small round shield. His one handed spear provides a good range advantage over all other classes. His play style is focused on the management of his distance, when to engage and when to disengage. He can also decide to throw the spear and continue with his side weapon, the gladius. 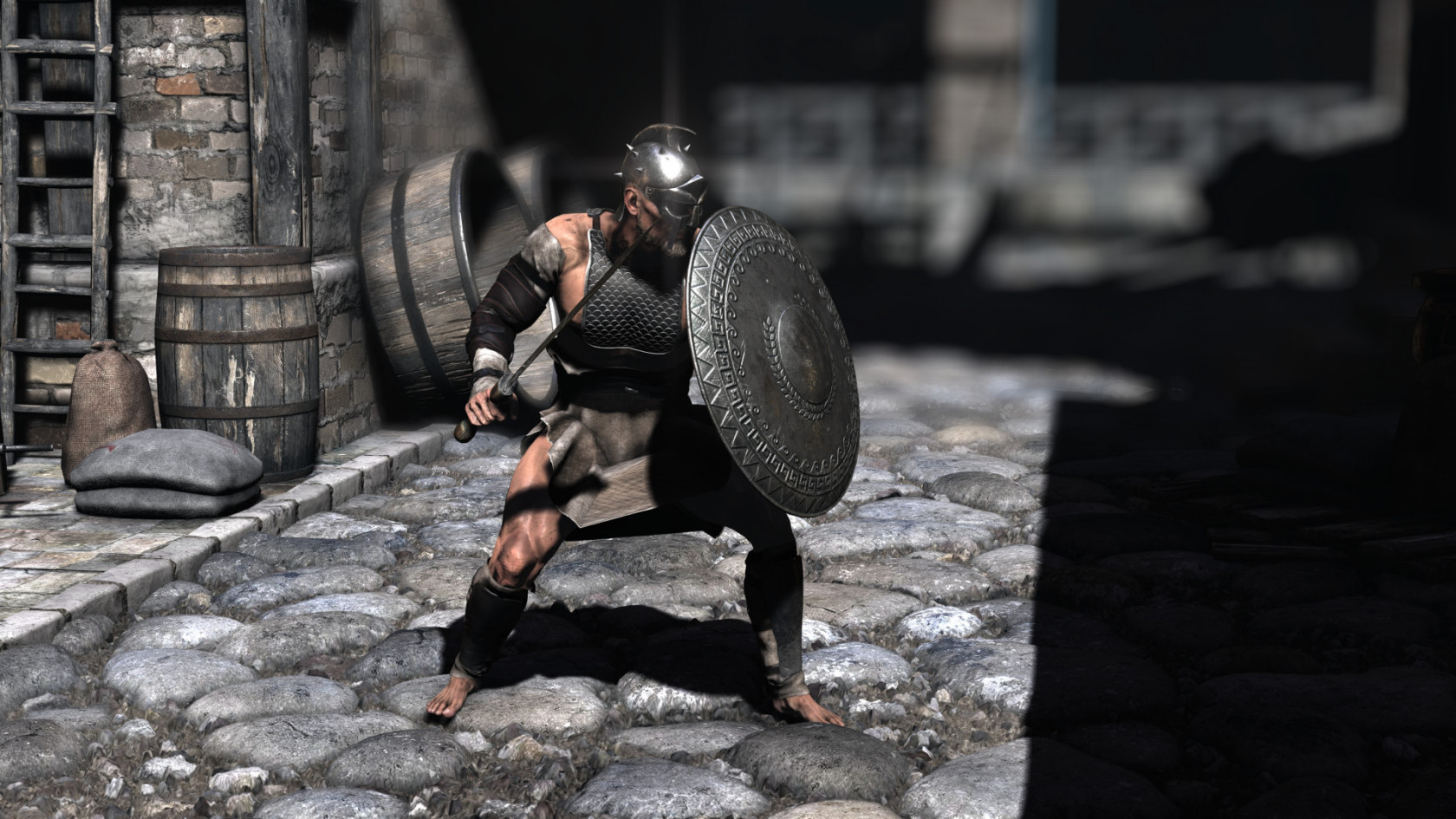 The Provocator is all about morale and its effects on his opponents. He is moderately armored, fighting with a medium or large sized shield and is an all-rounder class who tries to be the favored son of the audience. Successfully demoralizing his opponent shuts down any edge any opponents may have over him. 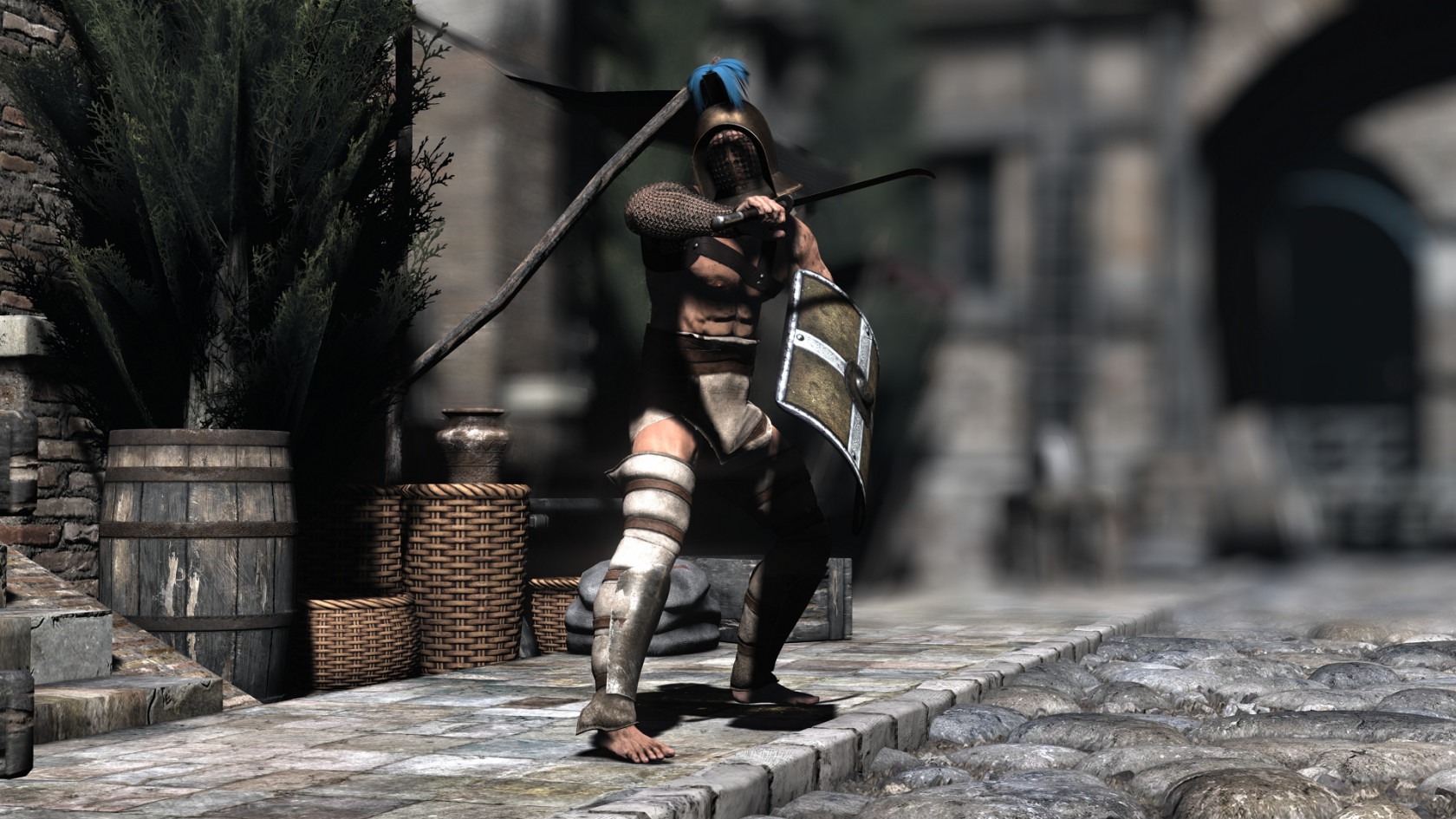 The Thrax is resembling a fighter of the ancient tracian tribe. He is lightly armored and uses a medium sized, arced shield and an arced short sword: the Sica. The Thrax class is, despite using a shield, still very mobile and build on this speed to outmanoeuvre his opponents. After the Dimaecheari he is the second most offensive class but not as exposed as the Dimaecheari is. The Scissor is very unique in his resemblence. He is wearing a plated arm protection in shape of a steel tube in his off hand that has a semicircular blade attached to the end. He is well armored and uses a gladius (short sword) in his main hand. He pulls of some surprising moves using his off hand like pulling down a shield or even the weapon of his opponent, counter-strike, grab a leg and other hideous tricks. 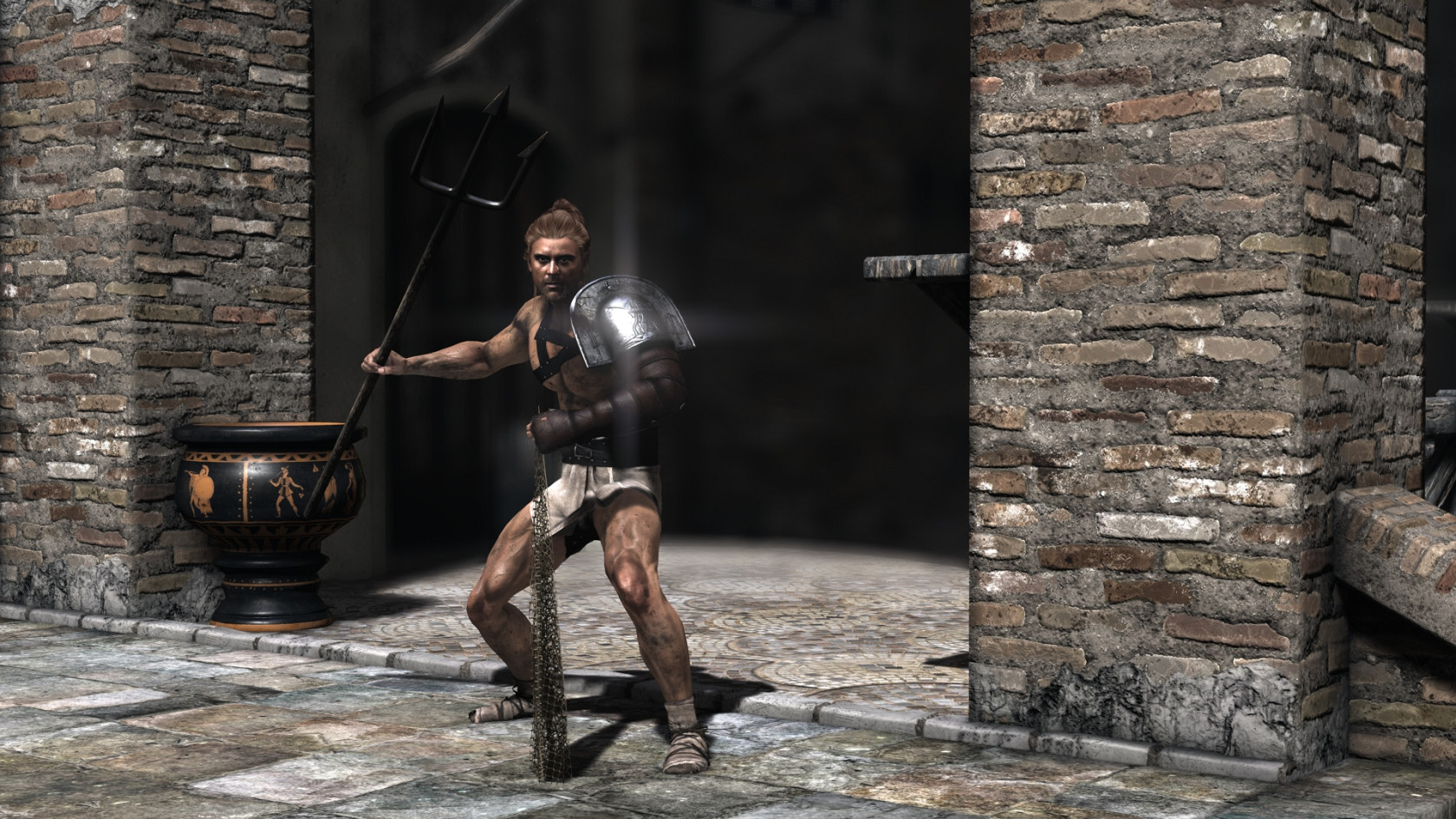 The Retiarus is the most unique classes of all eight. He starts the fight on a platform providing him an elevated position over his opponent. This position gives him a huge advantage in the fight. But with every successful attack of his opponent he is prone to fall off his platform. He can decide to climb it again but will be very exposed at that time. He is armed with a trident in his main hand and a large net in his off hand and hardly armored at all. Every opponent is aware of the danger the net imposes. Every opponent has seen a fellow gladiator caught in a net, get stuck and unable to free himself only getting relieved by a pinch of the trident.

The Retarius is also a ranged fighter. As long as he is on his platform he has a supply of stones or steel balls that he can throw at his opponents. He is only able to do so if the opponent is not engaged - this is the case in the first round or the opponent is trapped in a net or fell on the ground. 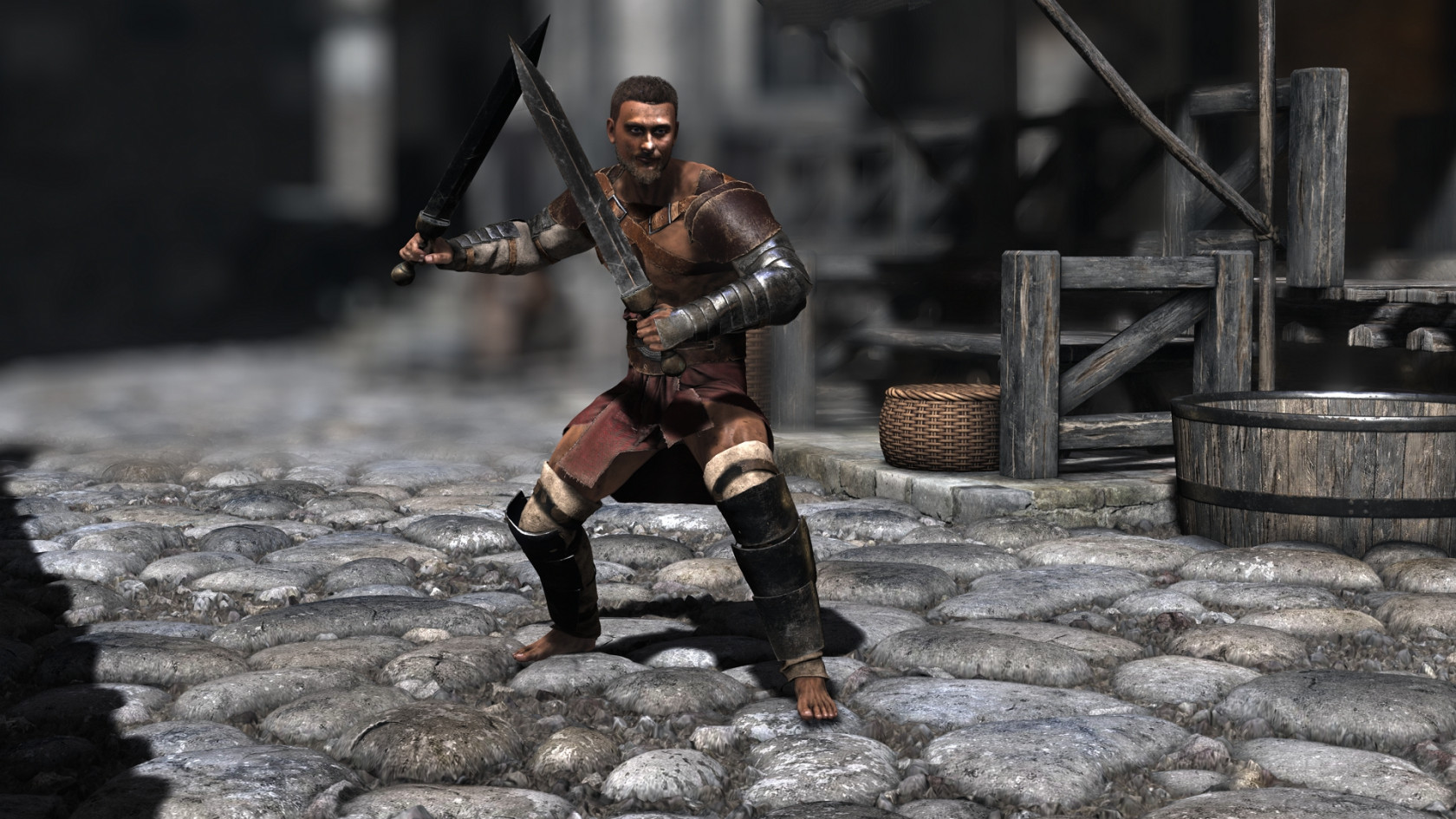 The Dimaechaeri is full scale offense. Equipped with two Gladius weapons and very little armor this characters is the glass weapon of the gladiator arsenal. That class features the main character of the popular Spartacus TV series.

Relying on evading the most critical situations, his double weapons blocks are rather a last resort when no other options arise. When the Dimaecheari gets in flow he slaughters any opponent not pulling his defense up enough.